A Shot in the Dark - Analysis of a Failed Malware Attack

Rather than let this entry stagnate on the hard drive, I've elected to share it while it may still be of potential research interest.
This is a brief (and incomplete) analysis of a semi-targeted malware attack attempt from June 23, 2010. The attack failed, but not before enough artifacts were obtained to take a peek at the motives at play. I call this semi-targeted because the mail message was apparently not received by a large number of people and the hosted binaries vanished very quickly. These factors may not be enough for this to truly be a semi-targeted attack, but in the absence of other information this designation will have to do.

Detection statistics reflect the date & time of initial analysis (late June 2010), not the time of the creation of this entry (August 2010, slacker)

The fake careerbuilder.com link actually pointed to http://www.zewiundbebe-jou.ch/resume.pdf which was a PE file that had yet to be specifically encountered by VirusTotal although it did trigger various generic signatures.


ThreatExpert is a huge time-saver, except in the case that it cannot analyze something because it's been built in such a manner to bypass Threat Expert specifically or generically (TDSS comes to mind, along with some VM-packer based  binaries that I've tried to run through the sandbox)

The interesting portions of the ThreatExpert report from the successful scan of the first binary
(http://www.threatexpert.com/report.aspx?md5=1717b7fff97d37a1e1a0029d83492de1) are as follows:

Running the binary in ThreatExpert results in the following (real or faked?) Adobe message one sees when trying to open content made in a newer version. I'm not certain which version of Adobe Reader is installed inside ThreatExpert, but various HTTP transactions to Adobe took place around the same time as the display of this message which makes me think that it's a legitimate message and not a fake.

Alg.exe is configured to run as a service named “WSALG2” with display name “Application Layer
Gateway Service2”. Initially the service is stopped. The following Registry Keys were created:

The newly created Registry Values are:

ThreatExpert says the file may come from Belize. The binary was built with Delphi.

The data identified by the following URLs was then requested from the remote web
server:

Similar malware incidents are documented in the next two links:

The common elements are that the malware drops c:\resume.pdf, uses the \inf folder, creates a service
named WSALG2 with display name “Application Layer Gateway Service2”, creates identical registry
entries for the service, appears to be from Belize.

Another description of an incident -

resume.jpg is clearly a file of interest in this case. It’s another Delphi binary file.

As this is the secondary payload and likely to be considered of higher value to the attacker, I suspect it was engineered to evade more antivirus tools. VirusTotal detection is lower, 8/41, about 20%.


This time, ThreatExpert generates almost no output with resume.jpg except to tell us that it’s probably from Belize. Not too useful.

Anubis is able to deliver a partial analysis of the file -

Interesting items from the Anubis analysis:

Hmm, East Asian keyboard input services. Anyone who has studied any sort of malware knows that this could be significant, suggesting that the malware either does, or does not want to target a particular population.

Query of \Safer\CodeIdentifiers\TransparentEnabled Checks if Windows Software Restriction Policies
are enabled. In this case, they are (value of 1).

TSUserEnabled checks to see if terminal server users have slightly higher permissions due to their
placement in the TERMINAL SERVER USER group.

Language Hotkey is perhaps being queried to determine the language in use on the infected system.

Next,  the EventLog RPC service named pipe PIPE\Eventlog  is read and modified, and a control code is
involved in three interactions. The control code is 0x0011C017 which is FSCTL_PIPE_TRANSCEIVE,
involved in the sending and receiving of data from an open pipe.  There are two elements, a  request
and a response.  If data is in the buffer when the request is called, it’s written to the pipe in a binary
blob. The response gives a status message on how the blob was handled.  I’m not sure this is relevant for
the analysis, but Anubis doesn’t go into enough detail to determine.

Some interaction with Ksecdd.sys takes place, but I am unable to determine relevance.

The relevance of these is unknown and is either left as an exercise to the reader or is something I might look into at a later time.

Apparently calling RaiseException with this code gets the attention of a debugger and may be used to
name threads  (http://www.highprogrammer.com/alan/windev/visualstudio.html). This URL refers to
Visual Studio, however this binary is written in Delphi. RaiseException may not care.

In this case, I suspect (but have not verified) that it may be used to interfere with execution in a
debugging/emulated environment.  It was mentioned that 0x406d1388 messes up WINE in the following
message: http://www.winehq.org/pipermail/wine-devel/2001-April/000540.html


Analyzing strings from the binary in IDA points us to other conclusions not possible in the sandboxed
environments.

Binary contains a variety of obvious commands to an HTTP-based command and control server, such as the
checkupdate command  (labeled ‘CheckUpdate” here). Such command structures make for useful IDS signatures. 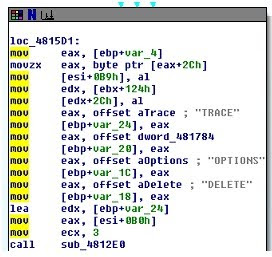 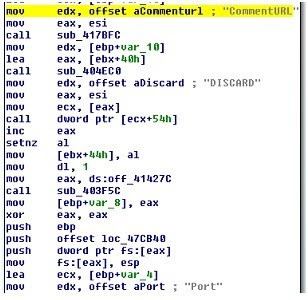 Other malware has looked for a certain character set and then taken actions based on that. For instance,
Russian users could be excluded from an attack.

The binaries stashed on the attack website were removed from the site in less than 24 hours. Can't imagine that anyone would need them at this stage, but if you do drop me a line or tweet.

I've just learned that the same MD5 for the second binary is still floating about, according to a ThreatExpert report from August 9, 2010:

TE is able to identity keylogger and trojan downloader capabilities, but nothing further.

If any researcher has any additional info about this malware, the HTTP command structure or other info I would appreciate any feedback or commentary.

As time allows I may try to analyze this further but at this rate it will be a while. Until then, may your shields be strong.